Book Review: A Minute to Death 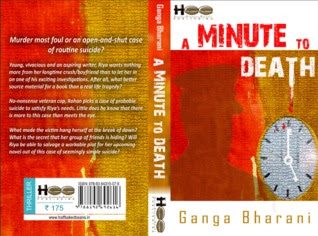 The only difference for me as a reader between romance and thriller is the speed and rhythm of your heart beat. A good romance or for that matter a novel on any relationship can and should make your heart beat slightly faster but mixed with gushy gooey mixture of every emotion though not in a heart wrenching way – like when you see hot Poorie masala served on the next table at a hotel and you have not got yours yet.  On the other hand, a thriller should make you think of the plot and the heart beat – more like temple run or when the person next to you at the treadmill runs faster than you and you can do nothing but increase your pace even when you really want to just go back to bed. Yeah Poorie and treadmill are so like romance and thriller (somebody has got their priorities right). Pardon my bad examples, I haven’t had my morning coffee yet. But hey.. that says enough about the book, the first thing in the morning, after reading the book until late night, all I want to do is to write about the book.
Disclaimer: I received this book from the author free of cost in return for a honest review.
Now that we got rid of that simple formality, we can get into our usual mode of fun review. I generally don’t review books that I don’t feel like reviewing and there are books from the other extreme – those that I can not wait to push my thoughts out to the world about – be it good or bad. Now this is one of those books. I will do my best not to give out any spoilers along the review.
Book: A Minute to Death
Author: Ganga Bharani
Genre: Fiction – Thriller, Whodunit
Main Characters: Rohan, Riya, Avanthika,
Setting: Chennai, India
The story revolves around the investigation of suicide (or is it murder?) of a college student by Inspector Rohan. His girlfriend Riya, a wannabe writer tags along with him so as to write her book and decides to help him to solve the case through her crazy ideas. She does help him at few instances. But the story takes a turn when they find another girl committing suicide at a different part of the city though there are no apparent similarities or relationship between the girls. If you need to know the climax, here it is: Rohan solves with the case with a great help of Riya and accepts that she is a good writer.

The narration is fast and racy, and the story-line is worth to kill for (if you know what I mean). I picked the book around 2230 hours last night and I couldn’t put the book down until I finished. I could have cheated and turned to the last chapter, (of course I wouldn’t do it to a thriller) – but you get the point. If at all I had a say about it, the book should have been a little more longer (says the girl who couldn’t wait for the last chapter).

The opening of the story is well written, though a little clichéd. I decided am going to like the book once I read that first chapter and I liked Riya enough. I could like her even though she was that stereotypical high strung, dramatic college chick when she tries so hard not to be. I wish I could have known her a little better. Rohan is the typical masala film hero – self righteous, confident yet romantic and sensitive kind. The skeptic in me didn’t buy him. But well this is a thriller not a romance – so I gulp the cynicism down.

The climax is unexpected and appreciated yet I wished it were a little more plausible. I didn’t like the romance angle of the book and almost till the end I was wishing there wasn’t one, though I understood why it was necessary at the climax. I felt it reduced the pace of the thriller by a bit and for a novella of about 120 pages that bit could be a concern. To write an intimate scene or not is almost a do or don’t  situation for an author, and kinda I wish she hadn’t. Not only it was very filmy but also seemed to the reader that the author didn’t want one but added one for the heck of having it. Having read the book till then, the reader would by then have understood not to expect any. But to start one and abruptly leave it half way is tortuous, especially when the book didn’t call for one. That is a tease – not in a good evil way.

I wouldn’t want to get into why the climax would work or not (for me, it didn’t), but I would point out why i feel  classic whodunits of Agatha Christie or Sherlock Holmes still are so rad. As a reader I want to be personally related to the solution – like  I should have seen it coming or at least make me go read the book again to see if I had missed any clue. Once that single knot is undone everything should be apparent to the reader himself – the most intelligent character in any book because he sees what the other characters don’t, he knows more – he knows what other characters think as well. So when I didn’t or couldn’t relate to it even when it has been unraveled, now that is a loose end that I don’t like. I liked all the suspects and theories that the duo cooked up – except the actual one. I have tried very hard to circle around the answer to the mystery that GB had so beautifully maintained till the very end. So I have to stop talking about it right here.
‘A Minute to Death’ is a no nonsense whodunit with a narrative that sags almost at no place and twists and turns that are sorta roller coaster ride for the reader – without wearing out the reader by trying too much. I am looking forward to other books of the author for another thriller.

One response to “Book Review: A Minute to Death”