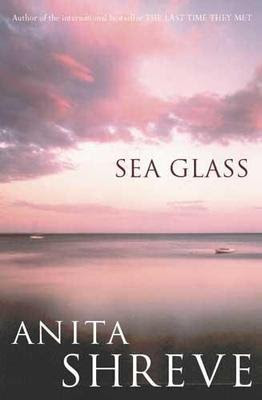 Sea Glass is a historical fiction set during the periods of Great Depression of 1930s at the USA and it is effect on the villagers of Ely Falls. I finished the book only when I was travelling in train – so took not more than 6 hours. I no longer remember where I picked the book from even and was avoiding reading as the blurb was little “boring” *am hiding away*

The lives of Honora Willard, Sexton Beecher, Alphonse, McDermott, Vivian Burton and Alicia Williard are intertwined by circumstances and actions. The novel begins with Honora, who was a teller at a bank and Sexton settling into a new house they on their wedding day. Sexton a salesman of typewriter  with strong career aspirations settles into married life without a problem. Honora learns to love him, her way into marriage and making ends meet with help of her mother Alicia Williard through her letters. Vivian a rich and independent woman, buys a house in the neighborhood just to help her friend out during the Wall Street crash. McDermott, 21 and Alphonse, 11 are loom workers where the working conditions and pay are poor leading to unsatisfactory labourers and McDermott takes Alphonse under his wings as one would do with a younger brother. Honora slowly comes to know about her husband’s habit of lying for the business and hiding things from her as a general and Sexton eventually joins the loom industry as he is thrown out of his job due to his dishonest loan appropriation.

The impending strike makes the central characters get close to each other as they troop plan the strike strategy from Sexton’s house and using his typewriter, under the leadership of Louis – a communist and monetary and mental strength from Vivian. Alphonse quits his work and joins as a page boy and he gets attached to Honora as well, while McDermott and  Honora fall for each other. The team works well together and in spite of the bleak future they have fun together. Sexton starts getting restless being at the back end away from action and proposes the group to use guns which gets instantly dismissed with his wife voting against it as well. The same day she finds out her husband has been cheating her. At the end Sexton shoots at a cop and then gets shot. The group assemble at Alphonse’s house trying to save dying Sexton instead everyone gets shot by gunmen except the ladies and Alphonse.

Each of her character made a difference and were portrayed typical to their period. Be it Sexton who was considered it was not important to inform his financial status or the reason he lost the job or the possibility of the strike to his wife. Or Honora who felt never once share her difficulties in making their ends meet or even let him feel the pinch of the pain. She did whatever she was supposed to, be a woman behind her husband support his decision – whatever it be. Her mother’s letters were on the same lines, offering matronly advises and filled with warmth and love. Vivian (I liked her more than others) being the rich and independent lady of class and wit, took a sharp turn from the spoilt, tantrum throwing girl to the one provided for her friends, the group and anyone else she could even she was not personally affected as others. She did what she could and took upon her to guide and support Honora after Sexton dumps his pregnant wife at the end after the death of his comrades. She was one among the men and even helped them create posters and slogans better  than the men who were on the line – the feminist, my kinda woman.
I loved the friendship between the women from two different worlds and ideals. Vivian dominates the men in the crew when need be while Honora cooks and types for them but never joins them in decision making not even when solicited by the other men (she says it would be his decision). While one talks about free love, the other could not even confront her cheating husband. In conclusion, It is a pretty straight forward story with slightly disappointing end. It is Anita Shreve’s simple yet poignant words that made be continue the book even during some boring parts.