I had been hearing rad reviews about The Book Thief for a while now from everywhere, thanks to its movie namesake. I knew I would like it, as it has been repeatedly suggested by like minded friends as well, but was holding back from jumping into for want of time.

Finally as soon as I got my mobile with a larger screen, I feigned illness to stay up in bed for a longer hours only to read. And I was not disappointed at all.

is a slow moving poignant story of a young, skinny German girl Liesel Meminger who lives with her foster parents Hans and Rosa Hubermann at 33, Himmel Street. The story has layers of intertwined lives filled with emotions that makes me feel bewildered not knowing where to start. What better, if not easier path to start than from the beginning.

The narration is by none other than Death, personified, which makes it all the more interesting. The story begins with the narrator saying that He had visited the girl thrice in her life time. The girl and her brother were given up to her foster parents by her mother, but en route to meet them her brother dies in the train. Liesel and her mother arrange for his burial in a nameless town, where she picks up a book dropped by one of the grave diggers – that’s her first book thievery. 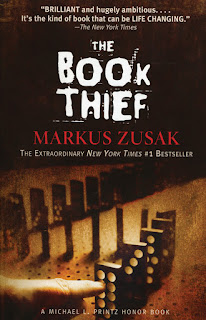 She is entrusted with Hans and Rosa, who takes care of her as their own. She particularly gets very close to her Papa. She grows up rich with memories and love, though they lived at one of the poorer part of the town and struggle to make ends meet. Rudy Steiner, her best friend and partner in crime, and Liesel, alongside the other street urchins steal food often from the richer neighborhoods. Her Papa teaches her to read and write painfully and slowly so that she can read the book she had stolen. Lives continue as peacefully as it can at a poor German community, where Nazis are already hunting down Kommunists and Jews.

The Book Thief balances between the history and cruelty of the Nazis and the personal lives of people whose lives the war shatters. Liesel’s family gets to harbor a Jew in their basement, a secret she even keeps from Rudy. Nazis want to recruit Rudy into their programme and his father refuses to send his son into the ill fated troop. Death continues to visit our little book thief, revealing too much might make it a spoiler. You should definitely read this book!

I should start off by saying how much I loved the simple yet powerful language used. Too many quotable quotes to remember and not to worry, I have shared them for you below the review. Though I got to know that Death visited her thrice earlier in the story, I couldn’t keep the book down till I finished the last paragraph since I wanted to know what happened next.

I loved the friendly banter between Liesel and Rudy as much as I loved the relationship of Hans and Rosa. Who could not admire Hans for his kindness, benevolence and integrity despite the hard times they faced! Every single character, be it small or not, from Max, Ilsa to even Frau Diller who was a Fuehrer loyalist was etched perfection.

Even tiny moments left a lingering impact in my mind, like Illsa offering notebooks for Liesel to write her own thoughts, which incidentally saves her life and Max’s sketches extolling the power of the words and its role in Hitler’s rise. Nothing but Markus’s words could have let me justify the suicide of the son of Frau Holtzman, who had already lost her other son to the war.

The way that Death was personified, not just as the evil taker of lives but as a being that “who gently carries off the souls of those who have passed” spun sheer magic for me and I clearly was hooked.

I had to hold the best for the last, don’t I? I simply adored Rudy. Be it his crazy obsession about Jesse Owens that he blackened himself head to toe, or his loyal friendship that he always accompanied our book thief even though he knows she was lying about hunting the Mayor’s house for food. I couldn’t stop grinning every time he asked for a kiss. And to know he wasn’t going to survive the end earlier on, made him more irresistible than before. Rudy Steiner you are the romantic guy that I need 😉 Augustus Waters, who?

Now few (or more) quotes that I loved from The Book Thief. Feel free to share them 😛

“Please, trust me. I most definitely can be cheerful. I can be amiable. Agreeable. Affable. And that’s only the A’s. Just don’t ask me to be nice. Nice has nothing to do with me.”

“No matter how many times she was told that she was loved, there was no recognition that the proof was in the abandonment. Nothing changed the fact that she was a lost, skinny child in another foreign place, with more foreign people. Alone.”

“Not leaving: an act of trust and love, often deciphered by children “

It’s probably what I love most about writing—that words can be used in a way that’s like a child playing in a sandpit, rearranging things, swapping them around. They’re the best moments in a day of writing—when an image appears that you didn’t know would be there when you started work in the morning.”

I cannot stop gushing over The Book Thief

yet, to anyone who would listen. Yes it is a little slow but powerful words make up for that. I am yet to see the movie, so I am not yet ready to have your “movie or book?“question but do fire away all your other questions.

Have you read The Book Thief, what are your thoughts on it? Let me know.