I have promised myself to try out new authors and try not to be a book snob, as hard as I can.  When I saw the book on Netgalley I was so drawn to the cover and decided that I have to get / read My DisOrganised Life. I have never read any of the author’s books but read the first line again – yup I am treating myself (hopefully) by reaching out to new horizons.

Book Name: My DisOrganised Life
Author: Nina Whyle
Genre: Fiction – Drama
Characters: Eve Poots, Jake Richards Luce, Chuck, Adam
Setting: The UK
Disclaimer: Thanks to the Author and Netgalley for the Advance Review Copy of the book in exchange for an honest review

Eve Poots has had her moments of shame on Youtube thanks to Tequila and an ill timed confrontation with her cheating and rude Ex and her loyal friend Luce and Nell, her sister help her through. But that was six months ago and she is trying to put them all behind her.

She works as an assistant at a TV channel and lives with her boyfriend Adam who is a junior doctor. She loves her job, in spite of repeated sexist attempts to put her down by Brian, and works hard to be Producer some day. She is an avid list maker and no thanks to her uptight religious parents and her brought up, Eve ends up being a shy, prissy and easy target for embarrassments.

When one of the contestants is disqualified from the Wedding Wipe-out the reality show that her TV channel is producing, Brian puts Adam and her name to fill in. One thing leads to another and Adam breaks up with her on camera in front of her colleagues. She is also attracted to her director Jake who finds her amusing.

What ensues is a series of hilarious incidents that happen in the shooting sets and her visits to her therapist Gudrun. The story follows her life till the end of the show shoot, when she finally stands up for herself defending from Adam and Brian and finds the man of her dreams. 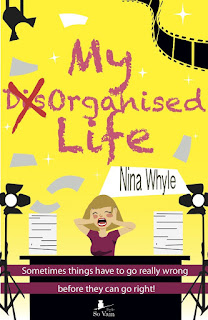 My DisOrganised Life is written from a single point of  view, Eve’s and seems like a long monologue. The writing is crisp and witty, at most places, making the read interesting, even if the scenes are somewhat cliched. There are many funny instances in the book, especially her talk with Gudrun and the very many tongue in cheek sexual innuendos. I like the prude, list making, in-the-closet-atheist Eve, even when there were times when I cringed at her ‘innocent'(?)  thoughts (assumptions?) about Adam.

On the other hand, I felt that the story is one dimensional and did not feel the depth of any character, making it hard to like them. I had several questions unanswered. What was happening between Chuck and Luce? What was Jake thinking? Who won the contest? At one point of time, I felt Eve was just being so self obsessed that she never once enquired about Luce’s relationship (Yes I know. I imagine the characters and their emotions are real). There were many British pop culture references that I had to Google to understand (or could have ignored them.. ermm.. you know me) but they worked in most places.

My DisOrganised Life is a light-hearted breezy novel with witty and snarky dialogues, I will look forward to reading further more from the author.