I love Dr House from the TV series, Harvey Spectre from SUITS and Alan Shore from Boston Legal. Oh Scarlett O’Hara from Gone with the Wind, of course. Wondering what is common among these characters that I seem to love so much? They are all arrogant, cocky and snarky and of course self obsessed. Yes I have set out to like all grey characters somehow and may be that is why I seem to love every one of the books of Gillian Flynn. Things weren’t any different with The Grownup.

Wait I am just trying to reason out my favoritism, but the truth is I really do like her writing and her well thought out character. For obvious reasons I had to pick up her new short story The Grownup as soon as I could and how could I end up liking her more than I was liking her earlier, if that makes any sense.

The narrator works at Spiritual Palms as a fake psychic, rather a keen and quick observer, a rise from her earlier occupation of providing hand jobs (yup you heard me right). She is smart, manipulative and of course selfish, much as expected from Flynn’s novels. When her newest client, Susan is worried about her house being haunted, the narrator decides to use that opportunity to earn some easy money.

But her visit to her house reveals much darker secrets and her step son Miles even threatens her to leave if she wanted to save her life. She chooses to ignore the teenager’s warning only to find out more creepy things like a cat whose tail had been cut off. But things take a turn when she hears out Miles’ side of story, when she finds Mike’s books at their library. Was she being conned by Susan, the wife of her favorite customer Mike? Or does the house really have some ancient history? What to believe and what not? 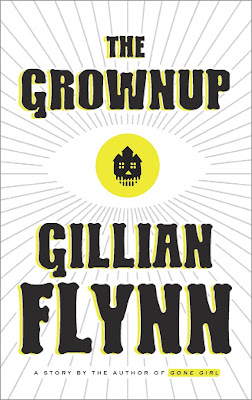 From a short story with less than 50 pages, I could not have asked for more. And if you were into horror and super natural, you sure would love the second part of the story. Like most of her books, The Grownup is filled with grey characters and I could not decide whom to believe or not. The story is filled with twists and left me wondering if I were siding the right guy / lady at all, much like the narrator.

Flynn has become one of my favorite writer in a very short time. She has the wicked way of making the reader reach out to his dark parts of the brain, even if he does not generally (I do). In this story I was hooked to her flow of unexpected twists and I loved the open ending, which may not work for many.

We start with the skeptic outlook of the narrator, then we start to look out super natural elements because your narrator does, thanks to Susan’s creepy house and creepier step son. Then we just unlearn everything we just read because there is a new version of the story. It is almost like Flynn wanted us to go, ‘phew we reached almost the end’ and she does it all over again and again and again. Damn it, READ IT ALREADY, I say.

P.S Did I say the narrator was not named at all?

P P S. Watch out for my next book review from a completely different genre from anything I have written yet – yes, we are going on a spiritual trip to Himalayas!

8 responses to “Book Review: The Grownup”