If I had to list out the top ten of my most favorite books, at least two would be about Afghanistan. Given their rich and diverse culture and complex history, it has always been a pleasure reading about the country. So when I got the review request for The Sentimental Terrorist: A Novel of Afghanistan, I grabbed the offer without any second thought. Read on more to know how  The Sentimental Terrorist: A Novel of Afghanistan stands in comparison to my other favourites from the same land.

The story revolves around four main characters – Mohsin, a rational social worker turned terrorist, Mumtaz, Mohsin’s love interest and aid worker, James Stewart a British consultant and Amala, a Bangladeshi aid worker. When Mohsin’s family is destroyed by the American army, he is looped into the Jihadi movement, albeit reluctantly. He tries to quench his need to avenge the death of his family with his faith, and his rationale is repeatedly tested. Losing Mumtaz to Pierre, another superior from DRAC doesn’t help matters.Mumtaz, though in love with Mohsin, marries Pierre so that she could help her domestically abused mother to get off from the clutches of her stepfather and the patriarchal society. We follow through her life, understanding how she copes with her very French and disappointed mother in law and if she gets to meet her ex again.

Amala, an economic scholar who is friends with James and K-Jim, works in dangerous areas to provide for her family and relatives back in Bangladesh. She is torn about accepting James’ proposal for the same reason. James has tried everything at his hand to make her accept his proposal and is worried about his competitor K Jim, who is the target of Mohsin’s attack.

The story spins around the fateful night that the attackers target the Iftar guesthouse at Kabul. While Mohsin gets ready to carry out his attack, Mumtaz comes down to Kabul once again to pick her mother and incidentally she and the other characters stay at the very place Mohsin is supposed to attack. Did Mohsin and Mumtaz meet again? Did he avenge the death of his village and whom did Amala end up choosing to marry? The last part of the novel answers these questions and more.

I loved the smaller quirkier characters like Meena, the quintessential Afghan sister who hated the imposing Taliban and was forever searching for a beautiful bride for his brother. Or Delphine, Mumtaz’s mother in law, who turned from a dissatisfied mother in law to a friend who could confide in her daughter in law. 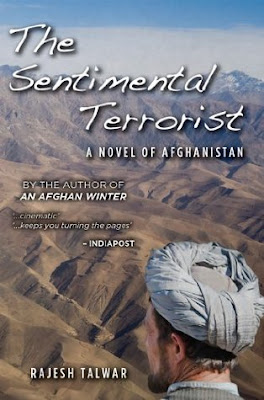 I love reading about the Taliban and their rigid society set up in their war-torn country. Though there is very less about them in the book, their teachings and their ‘rationale’ to aid people to understand the need for their ideas, have never stopped amusing me. I, like Mohsin, could not help but try to reason it out yet fail miserably. Personal rantings aside, I liked the way that the author had handled the reasonings of the Mullah and thereby Taliban for every one of their teaching.

Though the book is a tad bit lengthy and the plot line predictable, the author held my attention with tales from the culture rich Afghan. The author did not dwell much about the history of Afghan and made up for it with the down to earth stories from the Taliban’s Afghan. The characters were likeable and their actions believable, but I felt there could have been more to characters other than Mohsin.

If you want to have a quick and easy dig into the Afghan tales, grab The Sentimental Terrorist: A Novel of Afghanistan up right away!