Who in their right mind would reach out for a horror novel when they already know that they are not sleeping well at night? Who chases witches when they are being haunted by demons in their own nightmares? No one, except yours truly I suppose. But again how does one let go off a chance to read about the witches and their crafts, and probably have a bit of nightmare contributed by them as well? So how did Forsaken by J D Barker fare on the scare scale? Read more to find out.

The story revolves around the McAlistair family – Thad a bestselling writer, Rachael his pregnant wife and their daughter Ashley, and a deal that was made years with the Forsaken by one of them unwittingly. Though Thad’s first novel failed to hit the roof, his second and third novels shoot him up to the stars. He barely questions it, even when he understands subconsciously something was amiss.

Rachael takes pride in her loving husband, adores her daughter Ashley and expects her second with equal zest. She has not quite forgotten the rough start they had and that her husband had cheated her once. When the Forsaken wants to take back what was promised to Her, they have to deal with it in their own respective way, separately. Do they give in to their weaknesses or they put their family first, forms the present day storyline?

The story that Thad writes set in the 17th century, rather a parallel universe, narrates about the life of the witch and how She ends up hunted. We are taken to the magical world where time is subjective and manipulatable by Her. Physical appearances are mere disguises and often deceptive. The narrator and the reader oscillate between the sides – the young girl whom the narrator is attracted to or the witch who haunts people. She much like the folktales forces people to sign their souls off with the blood. Who is real and where does the fiction stop and reality begin?

The novel alternates between different point of views and time-lines, which works pretty well. The pace of narration is consistent and doesn’t slacken a bit. The storyline might seem familiar and the climax quite a bit overused, but the real strength of the novel is the vivid description of the scenario and the terror that engulfs the McAlistair family. The author makes it look like we are watching a movie, a scary one at that. Realising the story uses a famous character from Stephen King‘s novel creates a thrill that only a fan would understand. 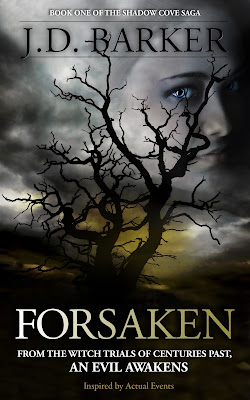 I am no scaredy cat in general, and the nightmares are something I have to accept as a part of the life of a horror addict. But just as I started reading Forsaken by J D Barker, I realised it was going to be much harder because it involves a pregnant woman and it somehow made me queasy. Thankfully, the writer did not take us down that road.

Despite all these strengths, I took a day more than usual to finish. Why? I couldn’t get to understand the characters, much less like them. I would have liked to have known the characters better and deeper, I felt they were pretty one dimensional. There was just a small part (less than a chapter) to explain the witch’s effect on the young girl, which could have been a tad longer and stronger. It might just be me, but I couldn’t help imagining ‘the minions’ from the ‘Despicable’ movies instead of the creepy, evil witch worshipers. My bad but I just could not.

For someone who is eagerly awaiting the release of the movie ‘IT’ and is gathering her wits to read the book, Forsaken acted as the right place to start. With an obvious and expected influence from Stephen King, Barker could be an author I might have to watch out. If you wanna read quick, fast, creepy thriller, I recommend Forsaken by J D Barker.

What are your nightmares about? Do books help you have more of those vivid dreams? Have you tried to stop reading such books? No I have not. Let us talk more.