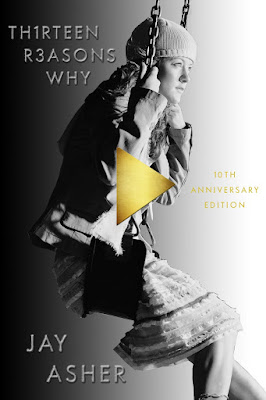 Everyone I know has been raving about the TV series. I have always fallen for books that had characters that dealt with dark, depressed and suicidal thoughts. I don’t think anyone likes happy, chirpy teenagers anymore. Oh we also adore nerdy, socially awkward teens. (Sarcasm, peeps).

When I heard, or read, that 13RW is the new GoT (which I have not read or seen)I could not wait to get back to Dubai, so that I could binge watch the series. As you all would have known by now, 13 Reasons Why, or 13RW,  is a Netflix’s adaption of Jay Asher’s book with the same name. Being the badass that I am, I had to grab the book and read it. And discussed it to few, by few I mean any people who would listen to me, about it.  First of, this is going to be a part post. Now on to the first part, the review.
13RW talks about Hannah Baker who kills herself with no apparent reasons at bay. Her parents and Clay, her friend are at a loss trying to understand her death. But soon enough, Clay receives a packet of cassettes at his doorsteps, that has Hannah talking to him, among others narrating the reasons that lead her to suicide. He is instructed to pass on to the next person after he hears them.
The story is fast paced and absolutely un-put-down-able. I loved the clever storyline that kept us on toes till the very end. Each side of the tape talks about a reason that triggered her to die, according to her. The book and the series, both alternate between the voices of Hannah and Clay, which works very well. The series was honest to the book and the audiobook was better even (yeah I did try the audio book as well). There are some changes made to the series, which for me made better sense. But the climax in the book seemed more plausible than in the Netflix series understandably.
At some low point, most of us would have had thought ‘who would be sorry , if I were dead right now?’. Hannah takes it a little further and takes that action. For me, she is not likable, relate-able or even tolerable. I was feeling that it was like Mean girls part 2, all the way through, except we knew Mean Girls would have a good (sorta) ending. Yes people were mean to her. Boys were particularly mean to her. Friends moved on. Shit happens. That is how life is. Though I agree all these reasons could have snowballed her towards her suicide, it was her choice.

I agree that every action that people unwittingly commit, might affect others, but that does not make you responsible for their reactions. No, I do not justify their actions, nor do I appreciate Hannah vilifying everyone else. In fact almost every one of the characters had an own issue to cope up in their lives, and they have their own mechanisms. Some work, some did not. Sadly Hannah’s didn’t work and still seems a glamorous way out. The question the story poses is not ‘who killed Hannah?’ more of ‘how do we avoid another death’, though it does not come of quite that way.
While 13RW boasts about talking about suicide among teens, the taboo, I am not sure if it does enough justice to it. Just alienation at the school cannot drive one to commit suicide, without discussing the depressed feeling part. It still confounds me why is it so hard to say depression or mental illness. I have not found even a mention of it in the book or the series. I don’t get how talking against suicide, bullying and rape is encouraged and even glamorous, while depression is not. Again that topic is for another day. Oh well, that disappointed me.
I loved the story, liked the pace and writing, but I simply hate the hype around it. In short my problems with Thirteen Reasons Why

are two pronged: 1) The characters are not just flawed, they are not deep. 2) It does not talk about the relevant issues, that it boasts of. The message sent across is wrong and poorly researched. There are several loopholes in the story, but I don’t even want to go into that.
Bottom line: Read once if you wanna know what the hype is all about. If you don’t, you are missing nothing anyway. Pick it up if only books with suicide and rape are okay for you.