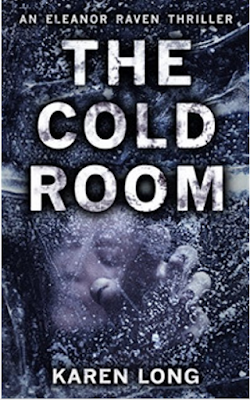 Don’t we all love a troubled character that tries to do right? More the suffering the merrier it is. Okay, maybe it is just me. But I am all for dark, broken characters, even if it portrays me as a sadist. If you were anything like me, you sure should check out the thrillers I have reviewed in here.
Book Name: The Cold Room

Series: Book of The Eleanor Raven Series
Author:  Karen Long
Genre: Fiction – Thriller
Characters: DI Eleanor Raven, Laurence Whitefoot, Lieutenant Eddie Myles,  Dr. Seb Blackmore
Setting: The USA
Disclaimer: Thanks to the Author for the free copy of the book in exchange for an honest review.
The story begins with DI Eleanor Raven undergoing a psychiatric evaluation to she certify that she was fit enough to get back into her groove. She and her partner Laurence Whitefoot are called in to attend a domestic hostage situation that involves an army veteran, where they find a human hand. What they find in the autopsy reports is more than they bargained for, and to make matters worse for them the military is stopping them from digging deeper.
Soon the city has another weird case where dead carcasses of dogs are strung in a boiler room. And add a few more dead bodies, and the Toronto DI Raven has too many things on her plate. Are they all interconnected or is it just her mind that plays tricks on her? Her visits to her psychiatrists are becoming more and more upsetting, and she begins to be wary of him as well. As the body count keeps increasing, her ability is questioned, and it is a race against time.
The only way for to solve the murders is to do what she has been fighting against. Re-visit the demons from the past. Will she be able to conquer her inner conflicts and find the killer on time? Spoiler: she does. Read on The Cold Room

to find out more.
The Cold Room is the third part of the The Eleanor Raven Series

. I have not read the previous works, yet the book worked its charm on me even as a standalone. The writing is tight and makes sure that you would not want to skim down any line. Though there were quite a few cliches, they did not hamper my interest in the story.
I didn’t find any character likable at all, especially DI Raven. I found her too annoying and reckless for my taste. The other characters, which were too many, were not developed to their potential. But that is understandable given the pace that book was set in. And of course, they might have been already dealt with in the previous parts.
I liked that the author doesn’t dumb it down for the readers by explaining every clue and boring them to death. She understands that the readers of this genre would be able to catch up with her thread of thoughts without too many explanations. That being said, wait to be surprised at the end.
You might have read quite a number of thrillers and DI stories. While the premise of this book may not surprise you, the crisp writing and the killer storyline would. If you are looking to read a fast paced thriller that would keep you reading through the midnight, The Cold Room

could be very well your choice.