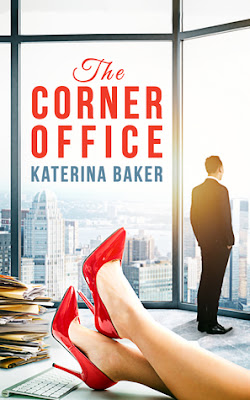 I am all for love-hate relationships. There is nothing like seeing the hot headed guy falling head over heels for the sassy mouthed gal (or the vice-versa). So it is not completely off my character to hope Tara and Richard click together at some point. On the other hand, Aidan doesn’t seem very off putting either, with his tattoo and motor bikes. Well, love is complicated and if you are not sure what I am talking about, read on my next review of The Corner Office

Tara Johnson is a hard working woman who fights hard to win her place in the male dominated executive room. She has no personal life other than visiting her ailing mother because her work consumes her entire day. She takes joy and pride in making her work place better for the other women there, the support she didn’t have when she started.

Her work life is still not an easy place, even though she is one of the top executives of a Fortune 500 company, thanks to her nemesis Richard Boyd. They started together fresh out of college and the past fifteen years have done little to ease the competition between them. Their boss John believes their rivalry brings the best out of them, thus helping the company and begins their final race towards their ultimate prize – the Managing Director position.Everything changes when Tara finds herself attracted to her subordinate Aidan, who is every woman’s fantasy. How does this love change Tara’s life? Does she realize that work place romances are not as easy as it seems before it is too late? You should grab The Corner Office

to know what find the answers.I requested the book looking for an easy read with the plot about interoffice romance with a dark twist. But it proved to be more than I bargained for and it is not your typical love triangle. The plot has a steady pace, and the intimate scenes are refreshingly well written. I finished it in about three hours which is my new best.I liked the premise and the ending which is what we were rooting for. I loved everything about the book except its lead characters. I know what I said sounds confusing. Let me explain.

I tried so hard to like Tara. She is hard working. She is at the top. She has her priorities. She treats other women with respect and encourages them. And yet I failed to like her at all.

Though two of the lead characters have been trying to beat each other for more than a decade, there is a very little back-story to support that, except that Tara had turned Richard down when he asked her out. And he is supposed to be a playboy, and you are supposed to dislike him. Because he is a serial womanizer; he does not respect others privacy.

But the problem I had with disliking him was that all these reasons were what Tara tells us. There is not one instance, (okay there is one scene – the very first one) that he behaves like a creep. And given the history of Tara’s men (man), I lost the trust on her calling him creep. SoI ended up liking Richard, not in a mushy way but in a ‘thank God he is not what Tara presumed to be’ way.

Despite all these, I kinda liked the undertone of the story that spoke about feminism and women empowerment, without making it preachy. If you want to read an interoffice romance with just a perfect dose of violence, flirty and steamy scenes, The Corner Office

should be your pick.