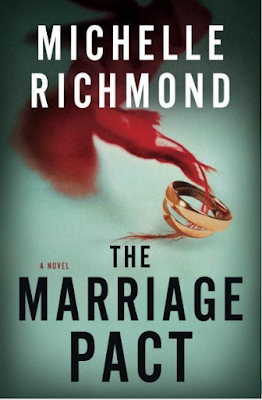 I don’t like people telling me to do something that I was already gonna do anyway. I am sure this one would irk everyone. Most of the time, the reinforcement is well meant, but it seldom works in the intended direction. Do you remember the joke about keeping a secret? Warn them not to tell anyone and you will have people hearing about very soon. Newlyweds Alice and Jake face such a conundrum. Read the review of Amazon’s bestselling psychological thriller The Marriage Pact

Author: Michelle Richmond
Genre: Fiction – Thriller
Characters: Alice and Jake, Vivian, Declan and Diane, Orla Scott, Finnegan, JoAnne and Neil Charles
Everything seems perfect for the newly-wedded Alice and Jake. The perfect couple receives the almost perfect gift from an acquaintance. An invite to join an exclusive and secret club called the Pact. The goal of the pact seems very simple: to keep their marriage intact, with few simple rules and a little help from their like minded ‘friends.’
Jake and Alice accept that they both want their marriage to last and accept to be a part of the Pact. When they are presented with a manual with bylaws for their ‘happy marriage,’ the couple take it in a stride. Some of the rules ask them to pick the spouse’s call whatever may be the circumstances, gift each other every month, get away on holiday once in every three months, etc. This practical prescription works very well for both of them very well for a while, and then life happens.
Alice’s firm requires her to put in long hours, and she faces the consequences of neglecting her marriage and the bylaws of the Pact. The ‘punishments’ make them reconsider their allegiance to the Pact, only to realize that ‘no one ever leaves the Pact.’ They work hard to follow the rules, which does help their marriage but the pressure to follow the rules gets overwhelming. How far would you go to keep up your commitment? Give up your marriage? Or the Pact? Grab The Marriage Pact

from here, right away.
First off, the premise is entirely new and made so much sense – what could go wrong when you have friends to fall back on to keep your marriage on track? Well, we Indians do know how that works. The family replaces friends in case of our arranged marriages. So yeah, I kept drawing parallels until I read the part about the bylaws. Oh, families are much better – at least they don’t punish. But the comparison stopped right there; the story moved in a fresh direction that I hadn’t expected at all (Yes, I don’t read the blurb before I picked the book). For once I was not predicting all the twists, that came out of nowhere.
The fast paced writing is well appreciated, making The Marriage Pact

last in the top 20 of the Amazon bestseller charts for more than ten weeks now. The book with 400 pages could have been cut shorter, but the racy narration mostly made up for it. The statistics from Jake’s work (he is a therapist *eye roll*) could have been avoided, all it did for me was to wonder why he was not doing a better job with his marriage.
At about 3/4ths of the book, I couldn’t wait for the book to end because I felt the story went off the rails and there were too many things making it a mumble jumble. It somehow turned from a psychological thriller to a sci-fi action to self-help(?) in about 100 pages.
There are a few questions left unanswered, and the ending left me wanting for more and better. But of course, either of the ending that was possible would have left me asking more. There were times that I wanted to push the manual against their faces to make them read it. Yes, they had signed off the documents without reading the terms and conditions, and one of them was a lawyer, for God’s sake. If you overlook these flaws and take the plot as such without questioning its credibility, you might enjoy this psychological thriller better.