I am known to be avoiding the fantasy genre for a while, these days. The number of blood sucking vampires and werewolves and dragons have gone too many on my ARCs shelves that I even have lost count of them. So when I was approached for the review of Harappa – Curse of the Blood River, I took a moment to think over. While I would love to read historical fiction, the blurb explained that the story would be borderline the fantasy, hence the hesitation. But curiosity won over me. Read on to know how it turned out.

Meet Vidyut, a young and powerful businessman who is a jack of all trades, who lives with the love of his life Damini. His perfect life is disturbed by a call from his great grandfather from Varanasi, who seems to be in his death bed. Vidyut leaves to a place which holds several secrets not only concerning his life but the entire human race. Unbeknownst to him, several events that were set off all over the world once he starts to his journey from Delhi.

We are told of the happenings in the Harappan civilization of the ancient past -the past that sees the effects of treachery and blood thirst. What is the relationship between modern day Vidyut and the fallen civilization? Only one man tell it all, his great grandfather who is running out of time and the strong and treacherous enemies are at bay. Read Harappa – Curse of the Blood River to find out more.

First of the premise is intriguing making us wonder if our school history text books were in fact, nothing but an elaborate ruse? Following the pattern laid by the likes of Dan Brown, Ashwin Sanghi and the new comer Luke Gracias, the story alternates between the past and present and the author does that with quite the flair. 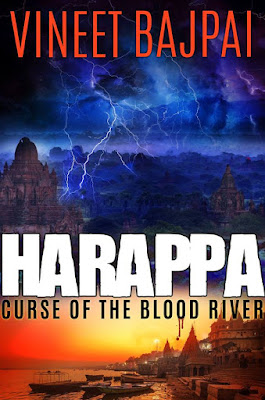 I had known the book was the first of the series of four books, but I had not realized until I came to it, that it ends in a cliffhanger and it doesn’t answer many of the questions. This might be disconcerting to some of the readers, including me. There were few scenes in the middle that were clichéd and could have been very well done without.

The rich history and the strong story line related to Harappan civilization is well executed. The author makes us ponder where does the line between mythology and history lie. The dialogues were kinda off-putting especially the modern day’s, where no one uses that many slangs (yaa, yaar etc) in real life. And the writing gets kinda repetitive after a while. Yet, none of these reduce the pace set by the author until the very last.

The introduction kinda gave away the entire plot, at least the plot of the first book. And then there is a prologue which piqued the interest but again once we have read the introduction there is very little suspense to keep up. There are a few misgivings like how long does it take for a person to narrate a simple tale. But if we do overlook such logical reasoning, I would not be surprised if the Harappa – Curse of the Blood River ends up to be a best seller.

24 responses to “Book review: Harappa – Curse of the Blood River”