What happens after you die? Depending on your religious beliefs, it may be afterlife, reincarnation or nothing at all. If you read a lot of YA literature zombie life may not be far from your thoughts. What if you were resurrected and your religious world was all ready to believe in it until you literally are resurrected? Would they understand you are the one that fulfills that prophecies? How would the modern world accept it? Moshe Karlin’s life just would answer those questions in An Unexpected Afterlife 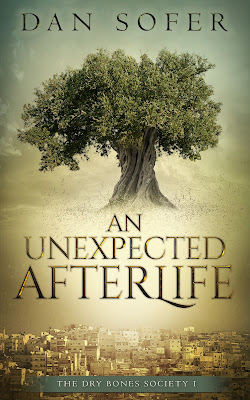 Moshe Karlin wakes up naked at a cemetery at the Mount of Olives, Jerusalem the morning after his 40th birthday. He catches a taxi to his house, trying to remember what prank his best friend Avi had pulled on him the previous night, only to find Avi and his wife Gallit in bed together. As if that was not enough to enrage him, Avi throws him off his house, saying Moshe has been dead for two years.

He reaches out to the local Rabbi Yosef, the one who buried Moshe when he was dead and tries to understand his situation. Without an ID, place to live or family to depend upon he stumbles on trying to win his old life, his wife, and his daughter. The Rabbi and Moshe are startled to find more ‘dead’ people are resurrected, and they seek their help. Some remember who they were; many don’t. Some are Jews, and few are not. Didn’t Torah promise that only Jews will be resurrected?

Meanwhile, not far from this chaos, the Prophet Elijah himself is stuck in an unforeseen situation. According to the scriptures and the destiny, he was supposed to save the world, but how can he when His world is changing. To make matters worse for the Rabbi the Great Council (of religious wisemen) discards the Rabbi’s theory of resurrection and pronounces the resurrected as ‘ Sitra Achra!’ (other side / unholy world).

What does the Rabbi choose – his free will and understanding of the Torah or the words of the Council that has guided him all through his life and also can change the stability and peace in a teacher’s life? How do Moshe and his clan move ahead? Did they find what they are seeking? The An Unexpected Afterlife

and the series will answer your questions.

is a steady paced narrative that kept me engrossed until the end, well, end of the first book of the series. Thankfully the book didn’t end in a cliffhanger perse, though the series would answer many questions. The writing is crisp, and the tiny streak of satire kept things interesting. I loved the strong world building, and all the central characters had depth

The one thing that kinda annoyed me at the was that the stories of Moshe and Elijah did not seem to be related all, at least in the first book. Maybe they will merge somewhere down the lane in the following books of the series. I am not a great fan of fantasy and the zombie/undead world and have avoided them for a while. An Unexpected Afterlife

made me realize what I have been missing out.

The story is primarily set in Israel, and I loved how the book let me have a glimpse into the world of Jews and their beliefs and culture. It is one of those things that made say yes when the author  Dan Sofer approached for a review of his book, and I am glad I chose it. If you are interested in reading a religious take on the resurrection An Unexpected Afterlife