What happens if you lose a few of your memories, that you wanted to forget anyway? Is it worth knowing a few that have left you, all over again? Would it be worth it this time? Bragadeesh Prasanna tries to help us answer these questions through his new novel Waterboarding.

Waterboarding is personally close to me as does its author. I have read the book about three times even before it hit the editor’s desk, as a beta reader. This review is not gonna be biased in any sense, so here we go. 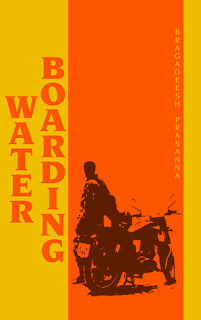 Setting: India
Disclaimer: Thanks to the Author for the Review Copy of the book in exchange for an honest review.

Ved meets with a terrible accident that causes him lose a part of his memories. He can recognize his parents and a few of his friends. Ved’s life takes an unexpected turn, thanks to the accident and according to his doctors, only his will and resilience had got him back alive.

Has this tragedy changed him as a person, especially when he has been given an almost clean slate, to begin with, due to his memory loss? Are there memories that he had willfully moved away from and would those leave him to stay sane, just as he had wanted? What caused him to erase a person completely from his life real and social life alike?

Ved’s friend Sara helps him recollecting his past. How far can you depend on one person, even if they had meant the best for you always? Would this friendship grow further into love, just like Sara had always wanted or is there something more sinister waiting for them? Read Waterboarding to know more about Ved’s life.

The story is narrated in three different voices, over different time periods. Though this might be a tad difficult to get into for some, the narrative is filled with dialogues making the story flow seamless and interesting. If you are like me, ‘havin-a-thing’ for unreliable narrators, and behold, there are three of them in this book.

The first time I read Waterboarding, much before the release of the final copy, I had to ask the author if it was a true story. The writing and the way the plot was unfolded made me feel that it was real. While there are too many smaller characters to keep up with, they don’t impede the pace of the story nor they reduce the overpower of the leads.

If you are looking for a romance that is little more intense than the last YA you read, Waterboarding should be your pick. It has the right amount of suspense, romance and drama to keep an hour or three of your weekend occupied.